The Ekiti State Chapter of the All Progressives Congress (APC) Young Women in Politics has been inaugurated.

The ceremony had women drawn from the sixteen local government areas of the state.

Erelu Fayemi who inaugurated the group under the leadership of Mrs Oluwatayo Aderemi said the role of women in politics cannot be underestimated.

She decried the act of relegating women to the background saying it is high time women rose to the challenge.

Erelu Fayemi urged the women to be dedicated, diligent and loyal to the present administration and APC as a party.

She also called for love among the women from across the local government so as to move the party forward.

The Ekiti first lady said arrangements had been concluded to empower women on a monthly basis.

The following 6 pages may interest you as well:

Why Our Party Must Not Fail, President Buhari to APC Members 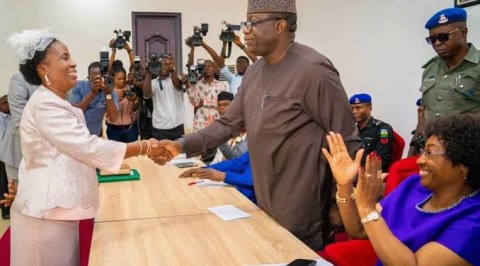 Ekiti to Dismiss any Male Worker Involved in Sexual Assault

Breastfeeding and the Modern Woman

The massive hike in Transportation Fare by Commercial Buses (Danfo)